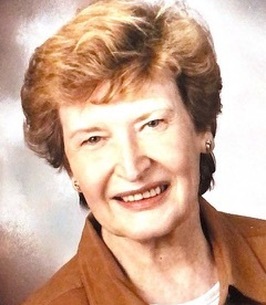 Kareen Kathleen (Keller) Hagopian passed away on January 3, 2022 at Badger Prairie Health Care Center, in Verona, Wisconsin, with her children at her side, after a long struggle with Alzheimer’s Disease. Her death was as peaceful as her life was meaningful for her family and her communities.
Kareen was born on November 16, 1932, in Beloit, Wisconsin, a city she always considered home. Her parents were Erwin and Aurora Keller; he was a barber and she was a homemaker. Kareen’s sisters Audra and Nevada, and brother Jack all preceded her in death. Kareen graduated with honors from Beloit Memorial High School Class of 1950. She was the first in her immediate family to graduate from college: Beloit College, class of 1954. The experience would transform her life and that of her family in the succeeding generations. After marrying Jack Hagopian in 1956, Kareen raised four children Kevin, Mitch, Shauna and Tina, in Itasca, Illinois. Kareen worked in the editing, publishing, and technology industries. She rose to be Senior Technical Editor in Bell Laboratories’ technical editing department, at a time when Bell Labs was among the most significant innovators in communications technologies in the world. She continued to work for AT&T in corporate organizational communications until her retirement in 1989. She was amicably divorced from Jack Hagopian after 38 years of marriage. In retirement, Kareen moved to Madison, Wisconsin, where she pivoted to a career in real estate with the Stark Company. Her specialties as a realtor included affordable housing and housing for the disabled. She was a profoundly articulate communicator who loved reading and talking with everyone.
Kareen was an extraordinary mother, aunt, and sister. She loved spending time with her extended family (including beloved dogs and cats) in Beloit and Madison. In the summers, she enjoyed time at the cottage she and Jack lovingly restored near Rome, Wisconsin. And in the winters, she gathered family around her for amazing Christmas celebrations, including the tallest Christmas tree you ever saw, and gifts so personalized you wondered how she could have known so exactly what you wanted. She leaves her four children, their spouses (Rhonda, Suzanne, David and Kevin), and her grandchildren Annie and Natalie Rose, with a deep feeling of gratitude among all of us lucky enough to have known her.
Kareen was a pioneer in business for women, and generously mentored many young women as they faced the barriers she had conquered. She was lifelong feminist who was an early member of the National Organization for Women, and a dedicated supporter of the Equal Rights Amendment. She was a proud political liberal, who made social justice the primary value of her life. Our Mom was a fierce and fearless advocate for women, underrepresented minorities, and all the disfranchised.
The family thanks the kind and caring staff at Badger Prairie for the many years of care they provided Kareen and especially for the unbelievable job they have done in keeping the residents safe from COVID. A special thanks to all the great folks on Walking Iron, with a special thank you to the Tuesday, 2nd shift caregivers.
If you’d like to offer a contribution in her name, she’d be happy if you’d: volunteer your time or money to a local women’s shelter, or an organization which supports educational access and fairness for people of color, and/or engage in political action in your community. Be as devoted to human rights and social equity as Kareen Hagopian always was. If you’d like to help another family with Alzheimer’s, consider donating to the Alzheimer’s and Dementia Alliance of Wisconsin, in Madison, Wisconsin. (www.alzwisc.org)

All rights reserved. This obituary is also archived at obittree.com